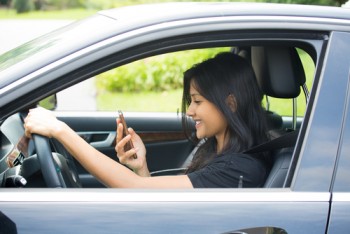 Law enforcement authorities in New York may soon have a new tool at their disposal to crackdown on distracted driving.  No more waiting months for cellphone companies to respond to law enforcement subpoenas for phone records, the so-called the “textalyzer” device will enable cops to immediately to determine whether a driver involved in accident was a using a cellphone in the moments leading up to the crash.

The bill, currently before the New York Senate Transportation Committee, will make it a requirement that for all New York drivers to consent to a “textalyzer” scan after an accident much the same way that drivers are currently required to submit to an alcohol test or “breathalyzer” after an accident. The refusal to submit your phone for testing after an accident could result in the suspension of your driver’s license.

The technology is reportedly being developed by the Israeli technology firm Cellebrite, the same firm rumored to have helped the FBI crack the iPhone used by San Bernardino terrorist Syed Rizwan Farook.  In light of Fourth Amendment search and seizure protections, the technology will be designed in a way that only allows it determine whether the phone was in use prior to a motor-vehicle accident, while keeping all other data contained on the phone, including personal information, private until a warrant is obtained.

One of the bill’s co-sponsors, Sen. Terrance Murphy, told the New York Post that the legislation is aimed keeping driver’s safe.

“This is a matter of keeping the community safe. We are trying to bring more light the fact that drivers need to pay attention and keep their hands on the wheel and off the phone,” Murphy said.

Murphy also recognized that the bill would likely be controversial with privacy advocates, but said it is necessary do the growing problem of distracted driving.

“We are trying to ride the fine line between breaking someone’s civil rights and giving he police the tools to find out how this crash happened,” he said.

According to the latest data from the Centers for Disease Control and Prevention, nine people in the United States are killed each day and another 1,153 are injured in motor-vehicle accidents caused by distracted driving.