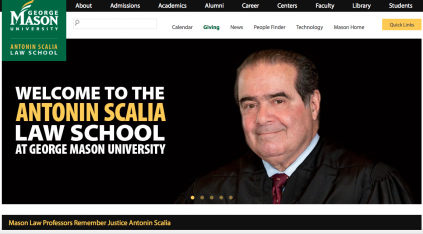 Last week, the Board of Visitors at George Mason University approved renaming the law school in honor of the late Justice Antonin Scalia after an anonymous donor provided a $20 million gift to the law school to facilitate the name change.  As of last Thursday, the name was officially changed to the Antonin Scalia School of Law at George Mason University.

However, almost as soon as the ink dried on the new name, the Wall Street Journal is reporting that school is “slightly adjusting” its new name, due to an overlooked acronym that became a source of amusement for some and a headache for university officials.  As Esquire points out, the Antonin Scalia School of Law at George Mason University, when abbreviated, becomes, ASSoL at GMU.

According the report, while no official agreement has been reached by the university on how to deal with this problem, for now the school website and some marketing materials now read:  The Antonin Scalia Law School at George Mason University.

The Journal article concludes by noting that Justice Scalia, known for his sense humor, would likely be amused by all the fuss.

Update 4/6/16: The New York Times reports that Dean Henry N. Butler addressed the ASSoL problem in a letter to students, alumni, and faculty on Tuesday. He said that the name “has caused some acronym controversy on social media,” and that “[t]he Antonin Scalia Law School is a logical substitute.”