Man ‘Signs Up’ for Strange Sentence as Alternative to Jail 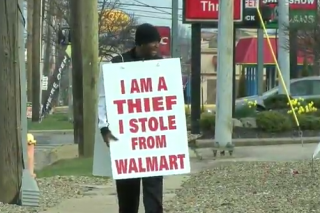 Greg Davenport, who was convicted of attempting to steal a 52-inch television from a Walmart in Ohio had a choice: spend 30 days in jail, or wear a sign that says “I am a thief I stole from Walmart” while walking outside the store, eight hours a day for 10 days, WKBN reported.

“I stole, I got punished, that’s it,” Davenport told WKBN. He said he accepted the unorthodox punishment so he could take care of his parents.

Someone checks every other hour to make sure Davenport is walking up and down the street. He has prior theft charges in other parts of the state, and Liberty Police Chief Richard Tisone hopes the public punishment will get him to stop this behavior. “Maybe you can get to their inner side,” Tisone said. “Maybe they’re a little embarrassed by the fact they have to hold a sign up, so it might affect some of these individuals, so I’m all for it.”