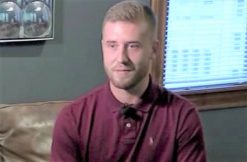 Texas man Ross Lebeau got good news Wednesday. The meth charge against him was dismissed, and he says it’s because the “meth” that investigators found in his car was actually just kitty litter.

“I was wrongly accused and I’m going to do everything in my power, with my family’s backing, to clear my name,” the 24-year-old told KTRK.

Now he’s lawyered up, and wants an apology from the Harris County Sheriff’s Office. He told the outlet that the fallout from the Dec. 5 arrest caused him to lose work, and embarrassed him. Lebeau explained his father left a sock full of kitty litter in his car, ostensibly to keep the windows from fogging up. His sister brought her own to show KTRK.

The outlet obtained a statement from the sheriff’s office about the misunderstanding. They say they did everything correctly. Reportedly, deputies pulled over Lebeau in a traffic stop and smelled marijuana in his car. They claim Lebeau admitted to having that drug in the console of his car, so they got their hands on it. While investigating, though, they also found a “substance” found in one sock.

“The deputies followed proper procedures and field tested the substance on two separate occasions which field tested positive for methamphetamines, notified the District Attorney’s Office who accepted charges for possession of controlled substance of 200 grams and Mr. LeBeau posted bond and was released,” they wrote. “During the investigation Mr. LeBeau failed to identify the substance and later, after being released indicated on social media that the substance was cat litter that he kept in a sock in his vehicle.”

They say the charge was dropped after the apparent meth got tested at the Institute of Forensic Science. Lebeau’s attorney George Reul blames it all on bad field-testing gear.

“Ultimately it might be bad budget-cutting testing equipment they need to re-evaluate,” he told KTRK.

It wasn’t entirely clear why Lebeau doesn’t seem to face a marijuana-related charge since he allegedly admitted to possession. We’ve reached out to the sheriff’s office and Reul for clarification.