Man Reportedly Cuts Off Own Penis After Thinking Wife Cheated 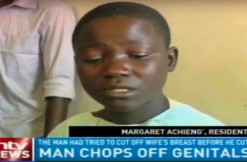 A man reportedly cut off his penis on Saturday after thinking his wife cheated on him with his brother, according to reports in Kenya. (This is not how you’re supposed to celebrate the Valentine’s Day weekend.) The suspect, Duncan Moseti, 24, is also accused of stabbing his wife, 20-year-old Margaret Achieng, in her sleep.

Moseti had come out with that cheating allegation the night before, on Friday. “He said he had reliable information that I was having an affair with his brother,” Achieng told Standard Media. “He told me to leave him and get married to his brother since he was more financially stable, adding that he would do something that would make us all regret in our lives.”

Things seemed to de-escalate after Moseti’s brother came, and calmed him down, Achieng said. Soon after, she went to bed—only to wake up early Saturday to her husband stabbing her in the chest.

“He then threatened to kill our baby and chop off his private parts,” she said. But the cut was shallow, and Achieng reported escaping. When she returned home with help, found Moseti had…removed his penis, and tossed it out a window.

You can see NTV coverage here:

A nurse, Gladys Wanjau, told Standard Media that his penis was too decomposed to be saved. “He is, however, in a stable condition,” she said.

Moseti’s brother is outraged his brother would believe such a thing about him. “It is a taboo in my culture to sleep with my brother’s wife,” George Bosire told Standard Meida. “I only wanted to help them as family members to start life here in Thika [a town in Kenya] when I invited them to come over.” The couple had been living in his house for about a week before the incident.