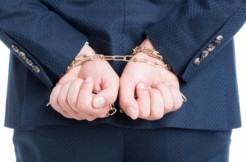 Eyal Katzman, 58, ran a practice out of his Kew Gardens, New York home. He also paid two underage, high school girls for sex acts several times between September and November 2012, the Queens District Attorney announced. A Queens Supreme Court jury agreed, and reached a guilty verdict on Thursday for four counts of third-degree criminal act, four counts of third-degree patronizing a prostitute, and five counts of endangering the welfare of a child.

Citing trial testimony, Queens District Attorney Richard A. Brown said a third girl introduced Katzman to the two victims, and he paid her for the work. All three went to the same high school, and each incident happened at Katzman’s law practice/home.

“A jury has convicted the defendant of being a sexual predator,” said Queens District Attorney Richard A. Brown. “As such, he has proven himself to be a threat to children and a clear and present danger to society in general. His conviction ensures that he is punished for his crimes.”

Katzman faces up to eight years in prison. His sentencing hearing is scheduled for August 22.
–