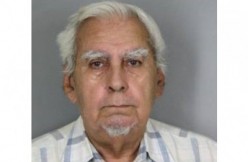 Cops in Fairfax County, Virginia say Dr. Fausto Fernandez “inappropriately” touched a 30-year-old male patient. The alleged victim visited HIBP Medical Service for a checkup on June 23, according to a police statement. Dr. Fernandez asked him some routine questions in the exam room, then allegedly told him to take off his clothes.

“The victim complied and the suspect allegedly proceeded to touch the victim inappropriately as part of the exam,” the police statement said. “The appointment concluded and the victim left the medical center. He contacted police later that night.”

Dr. Fernandez turned himself into authorities on Thursday after detectives got an arrest warrant. He has now been charged with sexual battery, a Class 1 misdemeanor in Virginia, publishable by up to a year in jail. Police “do not rule out the possibility there could be other victims.”

NBC 4 Washington reached out to investigators and learned that the alleged victim is a Latino immigrant. Cops said there could possibly be more since Fernandez treated a lot of Latino immigrants who spoke Spanish, and were new to the country.
–