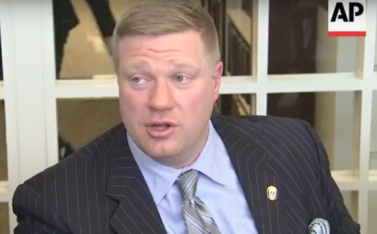 Tim Parlatore, a New York defense lawyer, gave new meaning to the phrase “challenging the weight of the evidence” during a sexual assault trial on Tuesday.  Parlatore represents Dan Nelson who is accused of attempting to rape a 36-year-old woman on a Murphy bed in a Midtown Manhattan office conference room after a night of boozing back in 2014.

While cross-examining the alleged victim, Parlatore attempted to cast doubt on the woman’s claims by insinuating she weighed too much for her story too be true. After first noting that both the defendant and the alleged victim each weighed 215 pounds, here is what happened, according to The New York Post:

“Did the bed fall or break in any way?” Parlatore asked about the less-than-3-foot-wide bed.

“No,” the victim answered, clearly offended.

Parlatore tried to continue, “Are you aware that the bed has a maximum . . . ” before prosecutor Maxine Rosenthal cut him off with an objection.

After court ended for the day, Parlatore told The Post that he attempting to convey to the jury that the fold down Murphy bed cannot sustain more than 220 pounds, according to the manufacturer’s specifications — the inference being the assault could not have happened as the victim says it did because the bed would’ve collapsed.

The Post article does not say, but one has to wonder how such a remark went over with the jury.  If he is convicted, Nelson might look back at this as the moment his defense collapsed.