LawNewz Presents The Most Absurd Lawsuits of 2016 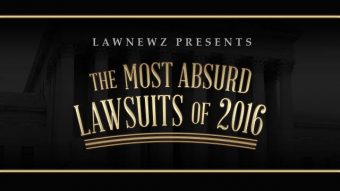 It’s been quite a year to cover legal news, and LawNewz.com has been on top of every twist and turn since we launched last January. What a year to be covering legal developments, especially during the 2016 election. As our editors (who are mostly attorneys) worked to analyze and break down the many cases that made the news, we came upon quite a few lawsuits that were just, well, flat out absurd for a variety of reasons. They are definitely worth revisiting if not for your entertainment.  So LawNewz presents to you, LawNewz’s List of Most Absurd Lawsuits of 2016. Enjoy! If you think of any that we left off, be sure to let us know in the comments section below.