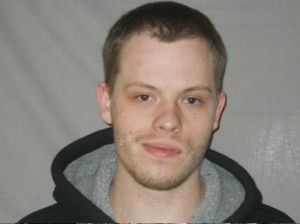 Dec. 30, Cornelius proposed to his girlfriend Sheri Moore, 20, over the public megaphone at their Walmart in Bay City, Michigan. (With the permission of employees.) Fellow shoppers clapped. Cornelius dropped to one knee, as any hunky Lothario does, and Moore, of course, accepted.

Police responded to a theft call, and arrested Cornelius and Moore at the mall. They found “Romeo” sleeping at the food court table. He allegedly admitted to the theft.

But the couple that steals together, stays together. Turns out cops said they found Moore with earrings and a necklace allegedly taken from the Walmart. She said she didn’t do it, but surveillance video had to ruin that by allegedly showing her putting the loot in her purse. Moore apparently told cops it was her new fiancée who stole that jewelry. Sounds bad for their relationship, but we’ve known people who’ve overcome worse.

Cornelius faces a retail fraud charge, and Moore was arrested for larceny. But we can’t be too weary about these people. They did it for love. At least they spent New Year’s Eve together in jail.

Moore and Cornelius, we wish you the best—oh, Cornelius is already serving probation for helping a relative attack three black dudes who simply walked by his home? And this new arrest might get him an additional charge? Well, okay.