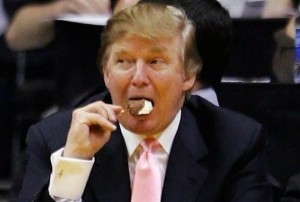 It ticked off a lot of people to find out Donald Trump screens his rallies. Yes, his campaign staff actually interrogate attendees to ensure that they are part of the “Make America Great” Movement. That was the case Thursday at his Flynn Center rally in Burlington, Vermont. Yes, anyone not pledging their support was kicked out. And that would have been a lot of people: Burlington is considered a stronghold for presidential candidate and Vermont Senator Bernie Sanders.

That’s mean and more than creepy. A wannabe president and his campaigners are surrounding themselves in an echo chamber. But is it legal? Meh, almost certainly.

The rally was technically a private event like any other which is invite only. The Flynn Center is private property, and people are easily subject to getting kept or kicked out. City officials had already been concerned that too many tickets had been distributed for the Thursday rally: 20,000 tickets for a place that seats 1,400 people.

“If Phish was holding a free concert at the Flynn and gave away 20,000 free tickets, we would cancel the event out of public safety concerns,” Burlington Police Chief Brandon del Pozo told the Burlington Free Press Wednesday. In other words, if Trump wasn’t going to kick people out for political concerns, then the local cops might do it anyway for safety.

And here’s the thing: the rally was free. There were no refunds to give to anyone screened out. There’s no potential for lawsuits based on someone losing their money to a ticket they weren’t allowed to use. There is no protected class here subject to special constitutional considerations. Trump basically had a party and he can invite whoever he wants.

And unless security overstepped a line — maybe throwing a first punch in a fight — there are little-to-no ways to leverage the law against Trump.

So The Donald was legally safe to kick people out. And he was definitely protected when hecklers interrupted his speech several times at the Flynn Center rally Thursday.

“I thought I heard a little voice over there,” Trump said after the third interruption. “Get him outta there! Don’t give him his coat. Keep his coat. Confiscate his coat. You know it’s about ten degrees below zero outside.”

Good thing the heckler hasn’t been reported to have suffered from hypothermia. Then maybe The Donald really would have a legal problem on his hands.