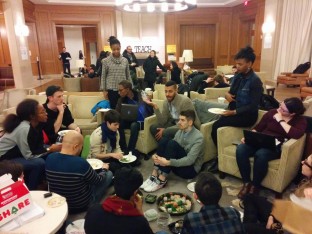 A group of law students is now calling for Harvard Law School to put an end to tuition, arguing the high costs to attend the elite Ivy League institution unfairly burdens minority students who they say generally come from poorer backgrounds.

The call for free tuition is the latest demand from Reclaim Harvard Law School (Reclaim Harvard), a radical activist group that has organized a number of protests on the campus over the past few months as part of a self-described effort to promote greater diversity and inclusion at the school.

“These fees disproportionately burden students of color, not only by creating a barrier to attending [Harvard Law School], but also by constraining the career choices of those who do attend by saddling them with hundreds of thousands of dollars in debt,” Reclaim Harvard wrote in the latest demand, according to the National Law Journal.

Reclaim Harvard goes on to state that free education is a “matter of justice,” adding, “The mission statement of [Harvard Law School] is, ‘to educate leaders who contribute to the advancement of justice and the well-being of society.’ Yet the enormous amount of debt that students must undertake in order to attend [Harvard Law School] is a direct obstacle to this mission.”

So, just how does Reclaim Harvard believe the law school can meet operating costs without tuition?

Well, they argue the law school would be able to sustain the operating costs without tuition by cutting back on teacher salaries or relying more on the endowment fund. Keep an eye out to see how many of the faculty supporters stick with the group after reading that proposal.

The Harvard Law School administration felt it was necessary to dignify this  demand with a written reply, a task that fell on the shoulders of law school spokesman Robb London.  Careful to not upset the fragile sensibilities of the students that make up Reclaim Harvard, London first acknowledged that the administration is committed to greater diversity at the law school, before hitting them with this apparent reality: a tuition free Harvard Law School is unsustainable.

According to the National Law Journal, London explained that the actual cost of educating students at Harvard Law exceeds the price of tuition and the difference is already made up by donations and the school’s endowment.

“But even if that weren’t the case, drawing down further on the endowment would ultimately require raising tuition, because as the endowment declined over time the school would become more dependent on tuition to cover annual costs,” London added.

Furthermore, he stated that approximately 80% of the current students at Harvard Law School already receive grants or some other form of financial assistance.