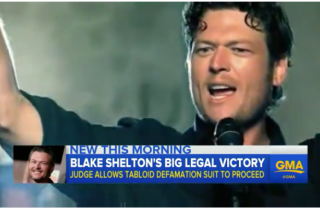 In Touch Magazine ran a cover last year featuring country singer Blake Shelton, with a large headline reading “Rehab for Blake.” The singer, while known for playing up his drinking, was not in rehab and had not claimed to have a drinking problem. He is now suing their publisher, Bauer Publishing, for defamation, Good Morning America reported. Bauer filed a motion to dismiss the case, but a California judge ruled in Shelton’s favor, allowing the case to continue.

Bauer argued that Shelton, as a public figure, cannot actually defamed for this, particularly since he posts online and sings about drinking. They claim, according to Good Morning America, that since he’s created a reputation based on drinking heavily, saying he’s in rehab isn’t a negative. Their editorial director also said in a sworn statement, “It was most certainly not my intention to convey in the headline or in the article that Mr. Shelton had actually entered rehab.” If that’s true, a headline saying “Rehab for Blake” was probably not the way to go.

Shelton said in a sworn statement that his image as a drinker is “part of my act, part of my performance, but in no way indicates that I have an actual problem with alcohol. He claimed that just because he’s a celebrity, that doesn’t mean a magazine can say whatever they want about him.

LawNewz.com founder Dan Abrams discussed the case on GMA Wednesday morning, and said that this may have been the biggest hurdle for Shelton. Now that he’s survived the motion to dismiss, the case can move forward to a trial, and into the hands of a jury. “Now that he’s going to trial,” Abrams said, “juries tend to be very sympathetic to people like Shelton in situations like this.”