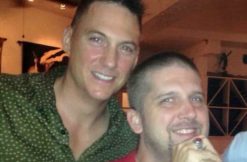 A couple in Key West, Florida say they got attacked because they’re gay. Kevin Paul Taylor wrote about it on his Facebook page on Thursday.

He and Kevin Seymour were biking home from dinner when a “drunk tourist on a scooter” started harassing them, calling them anti-gay slurs.

“I bet you faggots voted for that bitch Hillary–well you live in Trump Country now,” the tourist allegedly said. According to Taylor, kept stopping his stopping his scooter in front of them, and swerving into them. He writes:

Finally Kevin got ahead of him and the guy charges him with his scooter and runs into him and knocks him off his bike. Kevin is okay. Luckily it happened right in front of a business with lots of cameras and also there was a witness on the porch that gave a sworn statement to the police.

Police confirmed to the Miami Herald that the attack was reported early Thursday morning. According to them, the man also allegedly threatened “cut” the couple if they called 911. Cops managed to speak to a witness who corroborated the couple’s story, but they’re still looking into whether nearby surveillance footage captured the incident.

He is described as a white man in his mid-to-late 30s with a southern accent. He reportedly wore gray shorts, a blue polo shirt, and rode a black Eclipse moped.