Fugitive Vindicated With a Better Mugshot After Capture 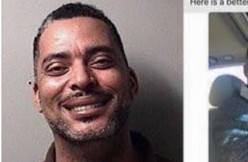 Donald Pugh got his second chance for a mugshot Wednesday, when he was arrested by Florida cops while Ohio cops also wanted to nab him.

We already talked about Pugh, and his crusade for a better mugshot. He saw that Lima Police Department in Ohio put up a pic in his wanted ad, and he rectified that disrespect by providing a nice selfie to replace it. Dude flaunted a nice suit and sunglasses. This is how wanted men are supposed to dress. It was also helpful in nabbing the narcissist wanted for two “failure to appear” charges, in connection with a DWI, and domestic violence.

Cops in Pensacola, FL, no doubt attracted by the sheer gravity of his personality, caught him Tuesday morning thanks to a tip. “Maybe that selfie helped people identify you better?” the Sheriff’s Office wrote on their Facebook page. Probably.

The Lima cops were grateful to see their buddy back in custody, but they lacked the courtesy to compliment the new mugshot, or his rugged stubble:

Got him! Chip “The Selfie guy” Pugh has been arrested in Florida. Thank you to the Escambia County Sheriff! pic.twitter.com/qmIWB4C40J

Cops have no manners.
–