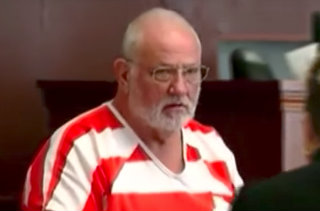 LOUISVILLE, Ky. (AP) — For years as a Kentucky judge, Tim Nolan sat in judgment of others. Now he sits in jail, awaiting trial on explosive accusations by prosecutors that he snared 17 women and juveniles into having sex over a seven-year period by using money, drugs and threats.

The former judge’s fall to accused sex offender has rocked northern Kentucky, where Nolan was long a fixture in political and legal circles in the suburban sprawl just across the Ohio River from Cincinnati. Today he’s in a jail cell in Kentucky’s Campbell County, poring over documents for his defense after a judge set a $750,000 bond, calling him “potentially a danger to the community.”

Nolan faces charges of human trafficking, rape, prostitution, witness tampering and unlawful transaction with a minor. In all, he faces 20 felony and two misdemeanor counts — and more than 100 years in prison if convicted on all charges.

“In this day and age, it’s hard to be shocked, but I was shocked when I heard this,” said Stephen Wolnitzek, an attorney who has known Nolan for decades.

Nolan maintains his innocence. His attorney, Margo Grubbs, said they will challenge the constitutionality of the state’s human trafficking statute as being “vague” and “difficult to apply.”

“We are pursuing the path of vindication vigorously,” Grubbs said of “a story as alleged by some of these women.”

Authorities say the alleged crimes occurred between 2010 and May 2017. In a court filing, Assistant Attorney General Barbara Whaley said some alleged victims were drug addicts, and that Nolan, as a former judge, used that to his advantage to obtain sex with his victims.

“The defendant used money, drugs, housing, threats to call the probation office, and violent acts, as means to coerce, deceive and force these women to engage in commercial sexual activity, for months and sometimes years,” she wrote.

Many details of the allegations remain unclear. Campbell County Police Chief Craig Sorrell said he was reluctant to release information, citing an ongoing investigation with “too many moving parts,” and alleged interference with the supposed victims that prompted the witness tampering charge.

Some details have emerged in court filings. One alleged victim — homeless and addicted to heroin — told police she had sex with Nolan in exchange for money more than 50 times, The Kentucky Enquirer reported. Another said she also was addicted to heroin and depended on Nolan for money, meals and transportation, according to the paper.

The shocking nature of the charges was jarring to those who’ve called the ex-judge a friend for years.

“My first response, of course, would be, ‘There’s no way,'” said Mike Williams, a former prosecutor. “But I don’t know the evidence against him.”

Decades ago as a fast-rising lawyer, Nolan won election as a Campbell County district judge in 1977. He served until losing a 1985 re-election bid.

“He liked to give the impression to the public that he was a tough law-and-order judge,” said Justin Verst, an assistant county attorney during Nolan’s tenure.

After his defeat, Nolan resumed practicing law. In recent years, he became an outspoken advocate for tea party causes, sometimes appearing at meetings to press his concerns. He relished the give-and-take of debates.

“If you disagree with him, he would enjoy that even more,” Williams said. “Tim liked to debate. That’s probably why he made a good lawyer.”

He also had enough political connections to be appointed to the state boxing and wrestling commission by Gov. Matt Bevin, who rescinded the appointment before Nolan ever served. And last year, Nolan campaigned for President Donald Trump‘s campaign and was elected to the county school board, unseating a veteran member.

Soon after the criminal charges surfaced, he resigned.

Nolan’s wife Julia died last year, about a year before the allegations publicly surfaced. Their daughter is the Campbell County circuit court clerk.

Nolan is due back in court for a hearing next month. His trial date has not yet been scheduled.
Fellow tea party supporter Erik Hermes said Nolan’s political allies are withholding judgment as the former judge fights the charges. “No one wants to condemn him until he has his day in court,” Hermes said. “It’s innocent until proven guilty.”