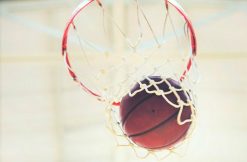 A family in Kenilworth, N.J. is suing after their daughter’s school wouldn’t let her play on the boys’ basketball team.

No one can say Sydney Phillips is bad at the game. The 12-year-old played on the girls’ varsity team last year, and she was made All-Star by her teammates, according to a New York Post report. It isn’t a short term hobby either: She wants to play in high school and college, too.

But the girls’ season at St. Theresa’s School got canceled in October because not enough players signed up.

“They said there was not enough interest and that application forms were not returned on time,’’ her father Scott Phillips told the outlet. “Even though there was no return date on the forms and there were likely enough players to field a team.’’

Her parents applied several times for Sydney to get on the boys’ team, but they got turned down each time.

“Archdiocese of Newark, Office of Youth Ministry Athletic League, runs separate divisions for both boys and girls in Grades 5-8,” a Nov. 8 rejection letter from the school read.

“It’s fun, but it’s not basketball,” she said. She was asked how she’s doing on the girl’s team.

“It’s not girls’ volleyball,” she said. “It’s co-ed.’’ That’s true. So are the paid basketball clinics for the younger kids.

The lawsuit will head to an Essex County Superior Court on January 5. Then a judge will hear the application for a preliminary injunction.

“We do not comment on matters in litigation,” James Goodness, Director of Communications for the Archdiocese of Newark, told LawNewz.com.

We also reached out to St. Theresa’s School for a statement.

[image via Rawpixel.com and Shutterstock]