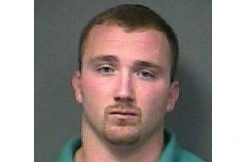 On Monday, a Tennessee police officer was indicted for sexual assaulting two women while on-duty. 26-year-old Christopher Patrick Odom faces one count of rape, one count of sexual battery, and two counts of official misconduct, according to a report from News Channel 5.

All this allegedly happened during traffic stops Odom conducted as an officer with the Spring Hill Police Department. The Tennessee Bureau of Investigators says one incident happened in June, and the second in July.

In any case, his police career is over. He was fired after the TBI released their findings, and the department disowned him in a statement obtained by News Channel 5:

The actions of Officer Odom are not indicative of a Spring Hill Police Officer and is in direct violation of departmental policies. The department takes great pride in serving our community and preserving the trust of our citizens.