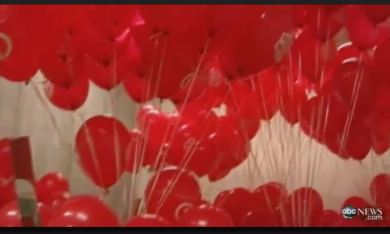 An Omaha man is suing to put an end to a decades old tradition at the University of Nebraska where football fans celebrate the team’s first points of the season by releasing thousands of balloons into the air.

According to the Lincoln Journal-Star, Randall Krouse is asking the court to “declare that the mass balloon releases during football games at Memorial Stadium result in the open dumping of solid waste, which is prohibited” under the 1976 Resource Conservation and Recovery Act.  He is also asking the court to enter an injunction, preventing the university from promoting the balloon release at future football games.

Krouse, who drafted his own lawsuit, claims the balloons can potentially travel thousands of miles away, harming wildlife, polluting waterways and even endangering small children who might choke on the popped balloons.  The Journal-Star notes the latex and rubber helium filled balloons can retain “elasticity for eight to ten weeks when exposed to air and more than five months when submerged in water.”  Furthermore, the four-foot long ribbon attached to the balloon is constructed of non-biodegradable polyurethane.

Although he may be the first to file a lawsuit over the tradition, Krouse is not the first environmentalist to try to put an end balloon release.  According to Fox Sports, Benjamin Vogt drafted a petition on change.org in 2014 asking the school to end the traditional balloon release immediately.

You can watch an ABC News segment on the Nebraska balloon tradition HERE.