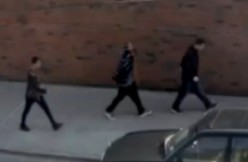 The New York Police Department say a 19-year-old man was assaulted Wednesday in what might have been a hate crime. Three attackers allegedly beat up the victim while calling him an “Arab” and yelling “ISIS, ISIS,” according to NBC New York.

The 19-year-old man, unnamed in the NBC report, was walking in Astoria, Queens when he was attacked, police told the network. One suspect, with a chin-strap beard, called him an “Arab” and allegedly punched him twice in the face. Another suspect, wearing a two-tone sweater, held a pipe, and yelled “ISIS, ISIS,” police said. The last suspect, wearing a black hooded jacket, allegedly held a baseball bat.

The suspects reportedly ran away after a witness spotted them. The 19-year-old refused medical attention after receiving minor injuries.

This investigation is ongoing. The NYPD wants anyone with information on this incident to call Crime Stoppers Hotline at 1-800-577-TIPS.