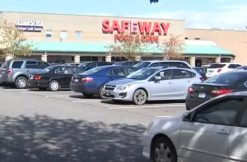 A woman in Washington State is accused of robbing a dying man. Laura Michelle Cowan, 37, faces multiple charges, including theft and driving with a suspended license, according to Skagit County records viewed by LawNewz.com.

It happened in the city of Mount Vernon. Local police said a 77-year-old man accidentally shot himself with a gun in a Safeway parking lot, according to KIRO 7. He was bleeding bad from his leg. The bullet struck an artery. Several bystanders reportedly responded, including Cowan. But instead of helping, she allegedly went in through the passenger side of his Jeep, and nicked his wallet from the center console.

Police said Cowan gave her name to first responders as a witness, then left.

The man, unidentified in reports, died at the hospital. Investigators later found missing things from the Jeep, eventually tracking down all the witnesses for more interviews. They say that under questioning, Cowan admitted to the theft as well as telling a friend to get rid of the wallet.