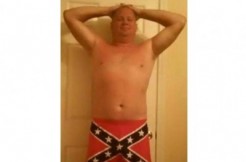 An ex-cop is suing because he was fired for posting a pic on social media. The image showed him wearing a pair of Confederate flag boxers. In a lawsuit filed on Monday with the U.S. District Court of South Carolina, Sgt. Shannon Dildine says he was treated unfairly because he is white.

“We have two claims: freedom of speech and race discrimination,” his attorney, Chris Potts, told The Post and Courier outlet.

They say Dildine’s employers at the North Charleston Police Department were unfair, firing him, while overlooking Assistant Police Chief Reggie Burgess, a black man who posed with Black Lives Matter protesters for a picture.

“Our employees are our ambassadors,” he said Thursday, according to The Post and Courier. “The photograph depicts Reggie Burgess fulfilling that role perfectly.”

It’s worth mentioning that Burgess only wore a grey suit in the picture, and personally displayed no Black Lives Matter-related imagery. See that picture, obtained by LawNewz.com, here. Burgess is on the far right.

Dildine said he posted the boxers picture to social media to stop an argument between two Facebook friends.

According to the court filing, he claims he believed the flag “symbolized opposition to bigger or intrusive government.” But his timing was so bad. The picture got put up on June 22, 2015. Five days before, Dylann Roof allegedly murdered nine black churchgoers in Charleston, South Carolina. The suspect was seen in pictures with Confederate flag imagery, and advocated racist beliefs. These killings fueled a debate over how appropriate it was to use this sort of image, but Dildine said he had been unaware of Roof’s link to the flag.

Authorities fired Dildine, and still defend their decision. It was tough to fire him, “but it was the right thing to do,” North Charleston Mayor Keith Summey said, according to The Post and Courier. Raalte had explained the controversial picture would hurt public faith in the police department.

Dildine seeks damages for issues like post-traumatic street disorder, and damage to his reputation. You can read the lawsuit, obtained by LawNewz.com, here.
–