A St. John’s University student was apparently so upset his classmate had a “Trump Make America Great Again” sticker on her laptop, he threatened to smash it up. Now, school authorities are trying to piece together what happened after a controversial social media post.

Clifford Durand, 18, posted on Instagram: “7,000 retweets and i’ll smash this b***h computer,” according to the New York Daily News.  The picture ended up being retweeted nearly 16,000 times. The newspaper reports that the young woman, so angry by the social media post, called up campus public safety. She then proceeded to throw her cup of liquid all over him. Here is the post that prompted it all: 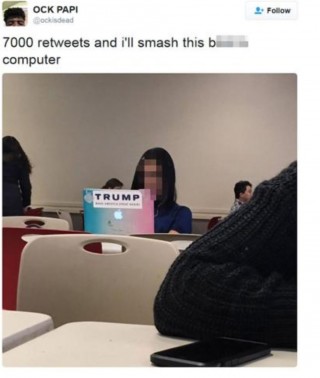 “He looked like he was in shock. I went towards him to hold him back,” a friend told the Daily News. A tussle among the students then reportedly ensued, but it is unclear if there were any injuries, according to observers.

The university responded to students’ concerns with these stern tweets:

Thank you everyone who reported the incident to us. This type of behavior will not be tolerated. Public Safety is handling the situation.

We hear your concerns. Safety is our top priority. Any student in violation of our Code of Conduct is subject to our conduct process.