Boy Accused of Stealing Cement Truck, Gets Mixed Up in Police Chase 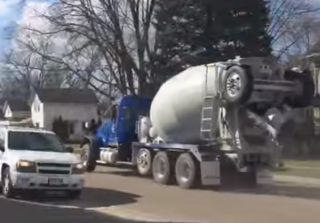 A Minnesota boy got mixed up with police on Sunday, after allegedly stealing a cement truck and going for a joyride, according to Fox9. A witness estimated the driver’s age to be about 11, but officials did not disclose how old he is.

KAAL reported that a police helicopter spotted the truck, and cops caught up with the juvenile driver at a dead end street after chasing him for over an hour. Two police vehicles were damaged in the pursuit, but no one was injured.