8th Grader In Trouble for Wearing Pro-LGBT Shirt: ‘SOME PEOPLE ARE GAY. GET OVER IT!’ | Law News
$promoSlice() doesn't exist!

8th Grader In Trouble for Wearing Pro-LGBT Shirt: ‘SOME PEOPLE ARE GAY. GET OVER IT!’ 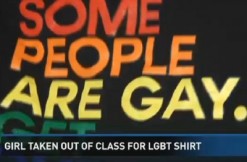 One Texas teenager says she was treated unfairly under a school district’s dress code policy.

13-year-old Ali Chaney, an eighth-grader at S.C. Lee Junior High School, told KCEN she wore a shirt to class that read “SOME PEOPLE ARE GAY. GET OVER IT!” That didn’t last long. Officials called her in, and told her to exchange the shirt.

Chaney told her mom Cassie Watson they did it to discriminate against her.

Now Watson has filed a complaint with the Copperas Cove Independent School District.

CCISD Spokeswoman Wendy Sledd told KCEN that the shirt was “disruptive” and that’s why Chaney was told to take it off.

“According to CCISD’s dress code in the student handbook and code of conduct, clothing that is disruptive to the learning environment based on reactions by other students is prohibited,’ Sledd said. “The student was offered a school shirt to wear and declined.”

Chaney claimed the dress code is unfairly enforced. Some kids get off scot-free. Others, like her, get in trouble.

She showed KCEN a picture of her friend’s anti-Obama shirt—it said the President is a communist and Muslim who threatens freedom—but she said that kid didn’t get in trouble despite the inflammatory message.

In response, the school district double-downed on their previous statement, saying the dress code is consistently enforced. They submitted a picture of a student who wore a Miley Cyrus “TWERK IT” shirt to class. They say the student was made to change shirts without any problems.

The CCISD gives school officials the room to make judgement calls when it comes to dress code.

“Administrators will use their professional judgement in determining whether attire is distracting or causes a disturbance,” reads the 2015-2016 Student Handbook. It’s unclear how employees get trained to enforce dress code, and what the limits of “professional judgement” are.

LawNewz.com‘s request for comment to the district  has not been returned.
–