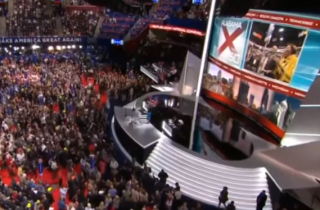 Things are getting rowdy at the Republican National Convention. A fight nearly broke out on Wednesday, when a British journalist reportedly shoved the wife of a retired judge, AL.com reported.

Terry Butts, a former justice with the Alabama Supreme Court, sprung into action when a British reporter pushed through the crowd during Ted Cruz‘s speech, knocking Butts’ wife off balance in the process. Butts, a spry 72, came to his wife’s defense.

“I’m still in pretty good shape and I jammed him up against the wall with my elbow. I said ‘Touch my wife again and they’ll have to haul you out of here,” he said

Butts, a delegate from Alabama, said his wife Suze has arthritis and was shaken by the shove, but was not injured. The reporter, who Butts said appeared to be in his 60s and had a British accent, clearly didn’t know what he was getting himself into. “I’m glad they made the Alabama Delegation check their guns at the door,” the retired judge said.

Other members of the Alabama delegation were ready to get involved too. Delegate Dennis Beavers said he almost joined the fray. Beavers is the senior whip of the delegation, and said, “I almost got to whipping.”

Of course Butts didn’t need any help. “I’m a Southern boy,” he said. “I know how to hand out what’s given.”

The reporter, who carried a camera, was not identifiable as belonging to any particular news outlet. Butts said the man was removed from the premises by Republican Presidential nominee Donald Trump‘s security.