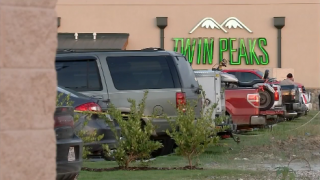 A Texas grand jury has indicted 48 more bikers arrested after the May 2015 motorcycle-gang shootout that took place outside of Twin Peaks, a bosom-themed chain restaurant in Waco. The territorial firefight, which left nine gang members dead and 18 injured, has led to a whopping total of 154 people facing felony charges, according to the McLennan County district clerk’s office.

In November, more than 100 bikers were indicted. All of the indicted individuals are being charged with engaging in organized crime with the underlying offense of aggravated assault and murder. They face 15 years to life in prison if convicted.

Authorities have said the shooting arose from an apparent confrontation between rival motorcycle gangs. Surveillance video from the restaurant shows dozens of bikers running inside and crawling for cover. The quarrel ended in a shootout between bikers and police, who were already stationed nearby.

The three-digit indictment number still has room for growth as 38 additional bikers have yet to face a grand jury.

Six of the 48 indictments were sealed by the court, which means the indicted individuals have not yet been named by authorities in connection with the melee.