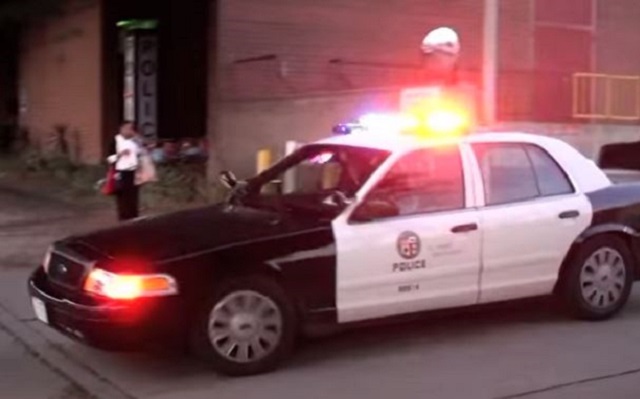 LOS ANGELES (AP) — Three teenagers in a program for those who may want to become officers stole three Los Angeles Police Department vehicles and went on patrol around the city before leading authorities on wild pursuits that ended with crashes, Chief Charlie Beck said.

The trio — two boys and a girl ages 15, 16 and 17 — “gamed the system” and used a vacationing sergeant’s name to sign out stun guns and radios and drive the cars right out of a stationhouse parking lot, Beck said. Police are investigating whether the teens impersonated officers and pulled over drivers.

The three were arrested Wednesday after two pursuits ended with crashes in South Los Angeles. A third police car was later recovered around the corner from a police station.

Beck said he had ordered a thorough review of the department’s cadet program and policies for managing inventory.

“We are going to take this apart top to bottom,” Beck said at a news conference Thursday. “We’re going to see what we can do better and we’re going to do it.”

The three were part of a program for teen volunteers who work in police stations and go through an academy to learn about the criminal justice system.

Authorities are still trying to figure out exactly when the cars were taken, but Beck said investigators were looking into the possibility that at least one of the vehicles had been missing since May 28.
Police first grew suspicious when a sergeant who was conducting a routine inventory noticed a patrol vehicle was unaccounted for. Investigators later reviewed surveillance video that showed a young woman with the vehicle at a gas pump, he said.

An officer who was patrolling in South Los Angeles on Wednesday saw two of the stolen police vehicles driving together and tried to pull them over. The teens behind the wheel refused to stop and led police on pursuits that ended with two separate crashes.

A woman suffered a minor injury at the end of one of the pursuits, said Josh Rubenstein, a police spokesman. She was “an innocent bystander in a separate vehicle,” he said.
The third car was recovered later when one of the teens revealed its location to officers, Beck said.

The teens were arrested on suspicion of vehicle theft and other charges. One was wearing a bulletproof vest that had been taken from a police station, the chief said.
Beck said there was no indication any actual police officers were involved in the thefts.

[Image of LAPD car via screengrab]