175 Pound Man Kicked Off Plane Because of Weight 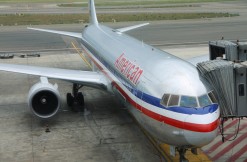 A man was kicked off a plane because of a weight limit. His weight: 175 pounds.

Dan Nykaza, a dentist out of Wilmette, Illinois, told ABC Chicago all about it. Apparently, he was bumped off an American Airlines regional carrier flight at O’Hare Airport in Chicago.

The crew went around asking passengers if they’d leave the plane in exchange for a voucher. No one took it. So the crew chose Nykaza and another guy. Nykaza says he and other guy were told there were the last to check in for the plane, then they were made to leave. The dentist, who had already been buckled in for the flight, was so mad he wouldn’t accept the $200 voucher.

“I was in shock,” Nykaza said. “I didn’t sleep that night. I was kind of numb all first day or two.” The change in plans shot down his intended trip to Salt Lake City, where he was to spend time with family.

“Every airplane has maximum takeoff weight,” said airline expert Brian Summers to ABC Chicago. “They can’t take off if they are any heavier than that.”

Nykaza guessed there was 300 pounds taken off the plane between him and the other guy, who apparently was smaller than him. A spokesperson for American Airlines later told ABC the dentist actually should’ve been offered more than $200, due to federal law, so Nykaza was then given a $500 voucher and 15,000 airline miles.

American Airlines also said their regional carrier, Envoy, flubbed the policy on that flight. The passengers who booked last should have been removed, not the ones who checked-in last, according to the company.

Sumer had some tips if you’re worried about this kind of thing happening to you. Book early, check-in early, and make sure they reserved you a seat. But it’s worth mentioning that every airline has a different policy on who to kick off when the plane goes over its weight limitation.