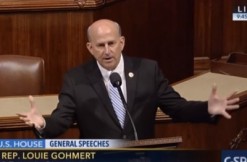 In a Thursday speech at the U.S. House of Representatives, Rep. Louie Gohmert (R-Texas) said same-sex couples were unnatural, and he made up a hypothetical scenario to try and prove it. He asked fellow lawmakers how they’d handle a post-apocalyptic situation, where they had to choose which people could get on a spacecraft, and start a viable colony outside of a soon-to-be destroyed Earth.

If you could decide what 40 people you put on the spacecraft that would save humanity, how many of those would be same-sex couples? You’re wanting to save humankind for posterity, basically a modern-day Noah. You have that ability to be a modern day Noah. You can preserve life. How many same-sex couples would you take from the animal kingdom and from humans to put on a spacecraft to perpetuate humanity and the wildlife kingdom? That’s why it’s been called part of the natural law, natural law given by the creator.

Switching back to real-life, he then criticized rights for same-sex couples and transgender people, saying these violated the First Amendment, prohibiting “the free exercise of religion.”

You can see him talk here, in C-SPAN video obtained by Right Wing Watch:

Now hear me out: Maybe Gohmert has a point. How would a colony of same-sex couples survive in space? We’d need to invent some kind of new technology to facilitate procreation.

For example, a lesbian woman’s eggs could be removed from her body, fertilized by a gay man’s sperm in a lab. Return the egg to her body, and boom, nine months later, there’s a baby.

Let’s call it in vitro fertilization. (Don’t worry, that name is just a placeholder. I’ll think of something better in the future.) Same-sex couples would simply need surrogate moms, and sperm donors to help start families.

Now if humanity could invent a technology like my totally theoretical “in vitro fertlization,” then maybe, just maybe, a “same-sex colony” could survive in space. But unlike space colonies, that sounds like science fiction.

This isn’t the first time Rep. Gohmert whipped out anti-LGBT fantasies with no bearing on our actual society. During a 2015 speech for an Eagle Forum event, he presented a hypothetical where an island of all-men or all-women wouldn’t last long since they couldn’t procreate.

After describing his scenario, he said, “Let’s come back in 100 to 200 years and see which one nature says is the preferred marriage.”
–