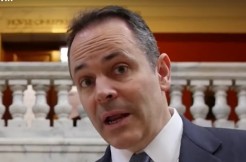 On Friday, Kentucky Gov. Matt Bevin promised his state would join several others in a lawsuit fighting the Obama administration’s transgender bathroom guideline.

“The federal government has no authority to dictate local school districts’ bathroom and locker room policies,” he said in a statement. “The Obama Administration’s transgender policy ‘guidelines’ are an absurd federal overreach into a local issue.”

It’s worth mentioning local context for the new development. In his statement, Gov. Bevin, who is a Republican, took time to throw shade at a Democratic rival: “Unfortunately, (Kentucky) Attorney General Andy Beshear is unwilling to protect Kentucky’s control over local issues. Therefore, my administration will do so by joining this lawsuit. We are committed to protecting the Tenth Amendment and fighting federal overreach into state and local issues.”

It’s probably safe to say Bevin and Beshear hate each other. Bevin has ordered a corruption investigation into his predecessor, who happens to be Beshear’s dad. Meanwhile, that same dad has called the current governor “vindictive.”

“The Governor’s statement is not truthful,” Beshear wrote in his statement on Friday. “The Office of the Attorney General has been closely reviewing this matter. On the day the federal government issued its guidance, the governor stated he was researching legal options. I expected to be consulted on those options, but my office has not received a single phone call from the governor or his attorneys on this matter.”
–