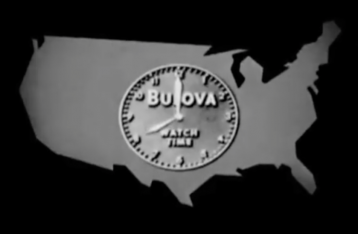 Fortune magazine reports the watch company Bulova paid $9 for the television spot — about $1 per second.  By way of comparison, Super Bowl 50 television ads went for $5 million for a 30-second spot — $166,667 per second.  A simple black and white still frame image for Bulova is onscreen for nine-seconds and includes a voiceover that states,“America runs on Bulova time.”