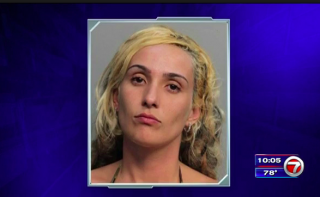 A Florida woman, who works as an entertainer, allegedly pulled down her dress to show her cleavage, and tried to hand over a wad of cash after she was stopped by a cop. The woman, Margaret Garcia, told Local 10 News that the cop is lying about what happened. The thing is, much of the interaction was caught on body camera video. Miami-Dade police pulled her over for speeding. The officer reports that when he approached her vehicle, she pulled “the top of her dress down exposing her bra.”

When the police officer asked Garcia for her license and registration, she instead pulled out a handful of cash.

“I know,” the woman replied.

“Why are you giving me money?” the officer replied.

“You don’t owe me any money. I asked for your license and registration,” the cop replied.

While searching the car, a police officer also found a bag of weed to which the woman replied, “Come on that’s personal use.”

“I smoke weed, what?” she said. Radio show host Andy Slater first obtained a copy of the body-cam footage and posted it online.