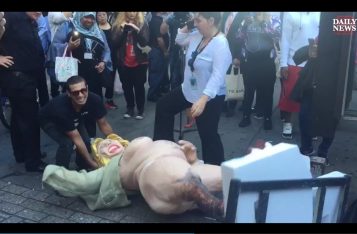 A fight broke out in downtown Manhattan on Tuesday morning after an artist placed a naked statue of Hillary Clinton outside the busy Bowling Green station.

The statue depicts Clinton with hoofed feet and a Wall Street banker’s head is placed close on her bare chest.  It was reportedly erected by an artist around 6:00 AM on Tuesday morning and was already causing fights within three hours.

A video captured by a New York Daily News cameraman shows the chaotic scene in which an “enraged woman toppled it over and started yelling at the statue’s creator.”

The video shows two women fighting with the artist, identified by the Daily News as 27-year-old Anthony Scioli, as he tried to pick up his statue off the sidewalk.

If the story was not already crazy enough, the newspaper reports the NYPD counterterrorism unit was called out to the scene to disperse the crowd.  The police also forced Scioli to remove his statue because he lacked the proper permit required for public demonstrations.