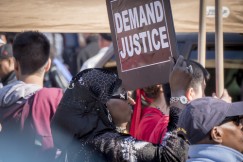 New body camera footage shows the last moments of Hernan Jaramillo, a 51-year-old Oakland man who  repeatedly screamed “I can’t breathe” before succumbing to a combination of multiple drug intoxication and “physical exertion.” However, an independent pathologist hired by the Jaramillo family rejected the drug theory.

The footage shows Jaramillo, face-pressed against the sidewalk, crying out, “I can’t breathe” and “They’re killing me” towards his sister as she stands close by while the police ignored his pleas for help.

Officers originally detained Jaramillo following a phone call to police by his sister. Jaramillo appeared to impede police efforts to investigate the incident. Police claim the man resisted them multiple times as they attempted to put him in a squad car.

As the debate about police body-cameras in this country continues, the tragic death of Hernan Jaramillo will likely be a rallying point for proponents of the technology.

Warning: The body camera footage may be disturbing to some viewers.