VIDEO: Antonin Scalia Said He’d Like This Judge to Replace Him 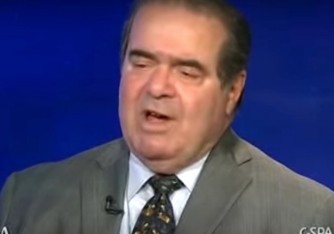 President Barack Obama and the Republican-controlled Senate are ready to tear into each other over who will replace the late Supreme Court Justice Antonin Scalia. Blood, tears, dirty tactics, destruction!—figuratively speaking. And while everyone’s popping off about who may or may not replace him, there’s one person we forgot to ask until now:

Antonin Scalia. He was talking about his book Reading Law: The Interpretation of Legal Texts in a 2012 interview with C-Span, when a certain name came up. Who was his choice?

“If there is one other name, one other judicial name associated with the two principal theories of this book, textualism and originalism, it is Frank Easterbrook,” Scalia said. “It is. If I had to pick somebody to replace me on the Supreme Court, it would be Frank.”

Judge Easterbrook works in the Seventh Circuit of the U.S. Court of Appeals. He was nominated for that position by President Ronald Reagan in 1984.

You can see Scalia talk about Easterbrook beginning at the 15-minute mark:

This is interesting from a political standpoint since Easterbrook once upheld a Chicago handgun ban, which the Supreme Court, with Scalia’s vote, later overturned in 2009. But it might be unlikely for Obama to choose Easterbrook, considering the judge’s relatively old age for a nominee (67), and the link to Reagan, a Republican president.