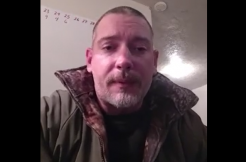 Mark McConnell says he was actually there Tuesday when Ammon Bundy was arrested and another follower was killed by police. He claims the follower, Robert Finicum, attempted to escape before being shot.

Bundy and seven other militiamen were arrested after a deadly confrontation with FBI and state troopers on Highway 395 in Oregon last night. They were on their way to a community meeting in the city of John Day. Bundy was scheduled to be a guest speaker.

Checkpoints had been set up on roads heading to the Malheur National Wildlife Refuge, which Bundy and fellow militiamen had been occupying since Jan. 2. Bundy’s group had taken over a federal land in protest of two ranchers being sent to prison.

In his video, McConnell said he’d been driving a Jeep, while Finicum, who went by the nickname LeVoy, had been driving a truck. Finicum was killed by police during the ensuing confrontation.

Here’s the video of what happened.

Let’s sketch out a picture before we get to the incident. McConnell said Bundy were in his Jeep. Meanwhile, Finicum drove others, including Ryan Bundy (Ammon’s brother), Ryan Payne, Shawna Cox, and a teenage girl unnamed in the video. When they hit a highway checkpoint, authorities told them they had to step out of the vehicles.

Finicum, who served as a de facto spokesman for the occupiers, sped off while someone was getting cuffed, according to McConnell. Soon after, his truck got stuck in a snow bank. McConnell says he heard Shawna Cox allege Finicum stepped out and charged at cops. But he also says her story “changed a few times.”

“I didn’t see the shooting,” he said, but somehow insists Finicum wasn’t on his knees when it happened. “I’m tired of all the gossip, bulls—t. ‘He was gunned down.’ I don’t know if he was gunned down. Hell, I was there.”

But why wasn’t McConnell arrested? “They interviewed me for two hours,” McConnell said. “They didn’t have anything on me” except maybe a trespassing charge. He says he told investigators he wasn’t part of a militia, even though he had weapons in his possession. He allegedly also wasn’t part of the original group who took over the federal building Jan. 2.

He thought the other guys were arrested in part because they posted too much on social media. “I do a damn good job of keeping myself unknown,” he said.  His video had been shared by over 2,000 Facebook users 4 hours after getting published.

He also says people from the “movement” have been clearing out of the area since the arrests.

LawNewz.com hasn’t been able to independently verify if McConnell’s (or Cox’s) claims are legit, and he has yet to respond a message we sent.
–