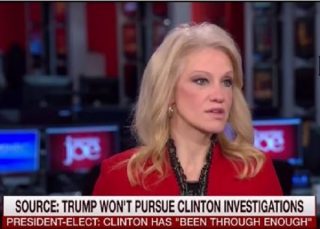 On MSNBC’s ‘Morning Joe’ Tuesday morning, Donald Trump‘s former campaign manager and current transition team adviser Kellyanne Conway discussed how the new President-elect does not intend to pursue charges against Hillary Clinton for her private email server or for the Clinton Foundation. Conway also expressed confidence that other Republicans will fall in line with Trump on this issue.

“I think when the President-elect, who is also the head of your party … tells you before he’s even inaugurated he doesn’t wish to pursue these charges, it sends a very strong message tone and content to the members,” Conway said.

Conway has no problem with Trump allowing his former opponent to move on by not pursuing charges, but made a point about how Clinton was already tried by the court of public opinion. “I think Hillary Clinton still has to face the fact that a majority of Americans don’t find her to be honest and trustworthy,” Conway said, “but if Donald Trump can help her heal, then perhaps that’s a good thing.”