Trump Wants Torture, Here’s What Happened to World Leaders Who Tried It 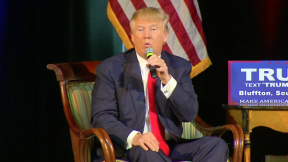 Donald Trump, not one to mince words, has been very clear this week about his views on torture: he’s all for it! The Republican presidential candidate addressed the issue in a Monday op-ed in USA Today and during a town hall discussion in South Carolina on Wednesday.

“Torture works,” the former star of NBC’s The Apprentice stated emphatically at the town hall. Trump addressed the question of whether he would use waterboarding if elected President with a resounding, “Absolutely!” adding that even assuming that waterboarding is torture, “we should go much further,” and that “waterboarding is fine but it’s not nearly tough enough.”

When The Donald says, “I’d bring back a hell of a lot worse than waterboarding,” what does he have in mind? Surely he is aware that the United States has banned torture, right? And it goes without saying that someone running for the highest office in the land knows that the U.S. ratified a UN Convention Against Torture. So he must have a nuanced strategy that would be tough and effective, while not landing him in trouble.

Perhaps he’s studied some previous experts of enhanced interrogation. France’s Paul Aussaresses, a general in charge of torturing Algerian prisoners administered beatings and electric shocks, and he was never sentenced. Pol Pot tortured prisoners in Cambodia by burning them, ripping out their fingernails, and suffocating them with plastic bags, but he never received punishment. Yes, he was brought before an international tribunal in 1998, and yes, he died before the trial, but he was also never found guilty. Chile’s Augusto Pinochet utilized a variety of information extraction techniques, ranging from electrocution, to hanging, burning, and suffocation. Sure, he was arrested by Britain in the 90s and later indicted by his own country in 2000 and 2006, but was never convicted due to claims of senility. This is the kind of craftiness we need in a Commander in Chief.

International pariahdom? Potential trade sanctions? Nah. Trump just wants to make America great again. And he doesn’t believe we can do that when ISIS “is cutting off the heads of Christians and drowning them in cages, and yet we are too politically correct to respond in kind,” as he said in USA Today. These lily-livered liberals with their safe spaces that ban offensive speech who don’t have the guts to remove the heads of enemy combatants. Am I right?

Whatever Mr. Trump has in mind is no doubt well-researched and within the confines of U.S. and international law. Otherwise, I just wouldn’t be able to take him seriously.