Trump: Disruptive Protesters Should Be Thrown in Jail 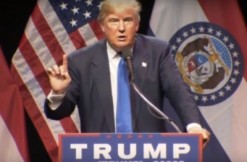 “I hope these guys get thrown into a jail,” The Donald told a crowd in Kansas City on Saturday night. “They’ll never do it again. It’ll destroy their record. They’ll have to explain to mom and dad why they have a police record and why they can’t get a job. And you know what? I’m going to start pressing charges against all of these people. And then we won’t have a problem.”

A protester had rushed the stage while Trump spoke at a Dayton, Ohio rally earlier that day. Video of the incident went viral, with Secret Service agents shielding The Donald.

Rallies for the Republican front-runner have been tense and sometimes violent. Saturday night’s rally brought this:

We had to use pepper spray 2 times outside Trump rally and arrested 2 people who refused to follow law. (1/2)

The Donald canceled a Friday rally in Chicago after protesters came out in force. This came after Trump supporter John McGraw was arrested Thursday for sucker punching a protester at a rally in Fayetteville, North Carolina.

“We are not involved,” the campaign said, but The Donald has done a lot to blur that line. He’s repeatedly hyped up physical confrontations between his supporters and protesters.

“I’d like to punch him in the face, I tell ya,” Trump said about a protester at a Las Vegas rally in February.

You can see similar comments he’s made here, via USA Today:

[image via Right Side Broadcasting screengrab]
–