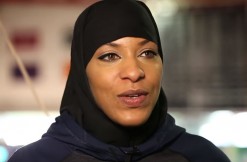 Ibtihaj Muhammad is going to be the first ever US Olympian to wear a hijab when she gets to the 2016 games in Rio de Janeiro. She’s a big badass at fencing, ranked seventh in the world, according to USA Fencing. Good for her! What’s not good is what she says happened when she visited SXSW on Saturday and had a run in with a volunteer.

I was just asked to remove my hijab at SXSW Registration for my ID badge.. I can’t make this stuff up #SXSW2016

Muslim women typically wear the hijab as a sign of personal faith, so Muhammad refused to take hers off.

Even after I explained it was for religious reasons, he insisted I had to remove my hijab for the photo to receive my badge #SXSW2016

The SXSW volunteer backed off, but:

Thennnnn I was given the wrong ID! From now on my name is Tamir & I work for Time Warner Inc #SXSW2016 pic.twitter.com/TE3jJR16P6

Please recall that Tamir is a male name.

“It is not our policy that a hijab or any religious head covering be removed in order to pick up a SXSW badge,” an SXSW spokesperson said in a statement to The Guardian. “This was one volunteer who made an insensitive request and that person has been removed for the duration of the event. We are embarrassed by this and have apologized to Ibtihaj in person, and sincerely regret this incident.”

SXSW, also known as South by Southwest, is an annual festival in Austin, Texas, and runs until March 20. This is not its first or worst public relations SNAFU.