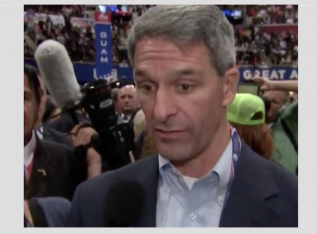 Former Virginia Attorney General Ken Cuccinelli on Monday afternoon accused RNC leaders of steamrolling over delegates in failing to allow a roll call vote on passage of a rules package.

“[T]his is infuriating to watch an RNC run convention roll right through the same gaveling through of people, following the rules they did in 2012. This is really appalling … if you won’t obey your own rules, there’s no reason to think you’ll obey any others,” Cuccinelli told MSNBC.

The issue, according to Cuccinelli, was a desire among grassroots Republicans to pass rules that would, among other things, require states to hold closed primary contests in future presidential primaries.  Cuccinelli said he was not aligned with the “Never Trump” faction that also joined in the brief protest on the floor of the GOP convention.  Cuccinelli also stressed that the goal was to take power back from the RNC establishment and spread it among the grassroots.

“We have the RNC trampling their own grassroots delegates,” Cuccinelli said. “For most of us, this was about getting good grassroots rules and getting a voice in the vote. You have [the Never Trump] people over there … but that is not where this all came from.”

After a bit of confusion on the floor, the convention chairman denied the motion for a voice vote.

When asked about that decision and where he plans to go from here, Cuccinelli added, “They cheated. They cheated. That’s what you just saw. You saw them violate their own rules. If the rules don’t matter, I’m not quite sure why we spend all this time writing them.”

The reporter then brought up whether this whole thing was a ploy by Ted Cruz supporters and the Never Trump movement.  Cuccinelli quickly dismissed this claim.

That’s ridiculous. This is not useful … we have stayed away from [Never Trump].  “The people you see here in Virginia … overwhelmingly, the Virginia delegation signed the petitions for the roll call vote today because we’re disappointed — well, we were furious about the treatment [last week at the rules committee] — but disappointed in a set of rules that centralized more and more and more power in the RNC and its chairman…,”  Cuccinelli said.

He added, “We put in amendments to protect, to actually fix the problems identified by Donald Trump, like those selection committees that picked delegates behind closed doors.”  He also said the Virginia delegation’s amendments would’ve put an end to many of the complaints raised by Trump delegates during the primary process.