Scarborough Unloads, Wonders if Comey ‘Feels Bad About Himself’ Over Not Indicting Clinton 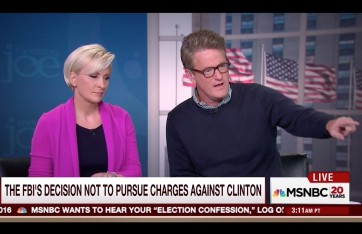 Morning Joe spent a great deal of time on Tuesday morning discussing the FBI’s Labor Day Weekend document dump of its investigation into Hillary Clinton’s use of a private email server.  Host Joe Scarborough let it be known that he is not impressed with how the FBI has conducted itself in this investigation and he did not hold back.  Scarborough was particularly brutal in his assessment of FBI Director Jim Comey.

The full segment is nearly 20 minutes long, so this clip begins with co-host Mika Brzezinski acknowledging that the FBI “has exposed itself to be a little bit politically weak.”  Scarborough eventually took over and let it rip.

“Oh my god, the sloppiness here is on the FBI’s part,” Scarborough said.

“What’s shocking to me is,” he continued.  “Find a prosecutor anywhere in America that will come on television today and tell you that they will allow principles to an investigation to sit in on another principle’s investigation in the middle of a possible criminal case.”

Scarborough is referring to the FBI and DOJ’s decision to allow Clinton’s top aide Cheryl Mills to play the unique dual role of fact witness and personal lawyer.

Scarborough then turned to Eugene Robinson to discuss the FBI’s failure to follow up on many details learned during of the investigation, including “missing laptops that contained all of the Secretary of State’s emails…” and Mark Halperin brought up how material was possibly destroyed by Clinton’s team after it was requested by House Select Committee on Benghazi.

Robinson’s response, unsurprisingly, had less to do Clinton’s conduct and more to do with the FBI’s decision to release so much information on an individual whom they did not indict.

Scarborough, however, agreed with this point as well.

“Gene, I agree with you,” Scarborough said, “The FBI got it wrong going both ways. The FBI was unfair, I think the FBI was shoddy in their process. They left too many things up in the air. This was political. They never were going to indict Hillary Clinton.”

“You know what, if you’re Jim Comey and you’re not going to … indict Hillary Clinton, treat Hillary Clinton like every other American and shut your mouth, but he did not do it!”

“You know why? He knew she probably needed to be indicted, but he wasn’t going to do it in an election year. He made his bed. He should sleep in it instead of continuing to leak this out. The FBI is sullied by this … but what are they going to do? Are they going to keep dribbling this out because Jim Comey feels bad about himself?”