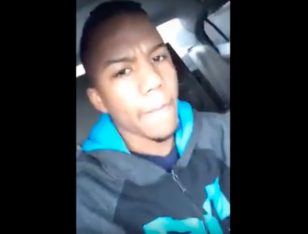 A 20-year-old Rhode Island man is accused of weaving in and out of traffic at speeds hitting as high as 115 mph before his vehicle slammed into the back of a dump truck.  Police say Onasi Olio-Rojas was seriously injured in the crash and they have plenty of evidence to use against him because he was allegedly streaming the events just before the crash on Facebook Live.

NBC 10 News in Rhode Island aired edited portions of the Facebook Live video during a newscast in the aftermath of the crash that shutdown a portion of the highway for two-hours as authorities worked to clear the scene.

Police say Olio-Rojas was driving erratically, swerving in and out of traffic at high speeds when he lost control of his Honda Civic.  Investigators say the vehicle spun sideways, bouncing off the back of the back of a dump truck and ultimately smashing into a concrete barrier.

Portions of the Facebook Live video show the speedometer of the vehicle hitting 115 mph in the moments leading up to the accident.  The driver appears to swerve across several lanes of traffic and is even driving along the shoulder of the road and various points in the video.

The driver of the dump truck walked away uninjured, but it took first responders some time to extricate Olio-Rojas from the vehicle.  He is reportedly in critical condition at a local hospital.

Police say they are expecting to file charges in the accident.