Officials: ‘Strong Possibility’ Stranded Cuban Rafters Injured Themselves So They Could Enter U.S. 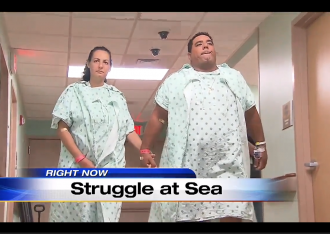 Last week the U.S. Coast Guard intercepted a group of approximately 26 Cubans in makeshift rafts just off the Florida Keys, including a group of seven individuals that all appeared to have suffered gunshot wounds.

Officials transported six of the wounded, including a pregnant woman, to a hospital in the Keys where they were treated for gunshot wounds, most of them to their hips.  Local news cameras caught up with the six recovering rafters at the hospital on Saturday.  All six denied shooting themselves and blamed unknown persons who shot at them in the dark in what they say was an effort to steal their raft.

However, at least one U.S. official close to the case is telling local reporters that officials believe the six hospitalized rafters may have shot themselves so the Coast Guard would be forced to bring them onto U.S. soil.

“There is a strong possibility that these Cubans injured themselves, but I am unable to confirm that,” an anonymous official told the news station WPLG.  The official added they lacked sufficient evidence to pursue a criminal case, so he did not expect authorities to take legal action against the six rafters.

Further, Frank Miller, a spokesman for the Border Patrol, said the six hospitalized Cubans who were brought ashore for medical care were processed under the Cuban Adjustment Act and will be allowed to stay in the U.S.  The other rafters, including the one with a gunshot that wasn’t taken for medical care, were all repatriated to Cuba.

U.S. immigration policy with respect to Cubans coming to the U.S. via boat or raft has become known as the “wet foot/dry foot” policy.  Those who make it land are allowed to stay, while those caught at seas are sent back to Cuba.  This has made for some very interesting Supreme Court cases over the years about what it means to “be on land.”