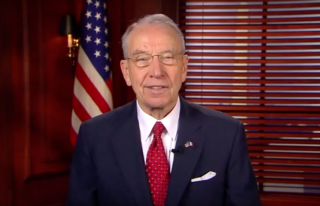 In a short letter published in The Des Moines Register,  Jake Smith, a senior at Roosevelt High School, totally takes down Iowa Sen. Chuck Grassley over his refusal (so far) to hold confirmation hearings for SCOTUS nominee Merrick Garland. Sen. Grassley, who is chairman of the powerful Senate Judiciary Committee, has refused to back down after President Obama announced his pick for the Supreme Court. Grassley believes the next president should decide who becomes the next Justice not Obama.

“What we’re going to be doing over the next months in the Unites States Senate — this is not about Judge Garland or anybody else. This is about a principle of letting people have a voice,” Sen. Grassley said in March.

Smith in his ‘letter to the editor’ didn’t hold back: “Following the direction of the Republican’s logic, I politely ask you to step aside as chairman of the Senate Judiciary committee until the elections take place.”

Here is more of what he wrote:

However, you are running for reelection in Iowa this November. At that time, Iowans will go to the polls and their voice will be heard. Until then, who speaks for the people of Iowa? You, as chairman of the Senate Judiciary Committee, carry significant power in determining who gets to become the next Supreme Court Justice. But senator, since you, too, are in an election year, how can you possess the authority to make a decision that will affect the future of our country if “the people have not yet spoken”? Following the direction of the Republican’s logic, I politely ask you to step aside as chairman of the Senate Judiciary committee until the elections take place.

If you want to make critical decisions based on a constructed rationale, at least apply your creative thinking to all elected officials — including yourself.

“I know he’s not going to read this letter from an 18-year-old and say, ‘Oh crap. I have to step down now,’” Smith said to The Huffington Post. “But I’m just trying to kind of match his ridiculous statements about this issue with another ridiculous statement.”