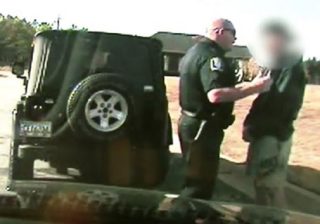 A Georgia police officer is no longer on the force after video showed him violating police policy and threatening a teen who yelled at him. The now-former Officer James Sanders pulled over a driver who had shouted “F**k the police” while passing him on the road, according to Social Circle Police Chief Tyrone Oliver. Sanders followed the car and pulled over the driver, before proceeding to yell at the teen who shouted the profanity.

Police footage of the incident showed Sanders threatening the teen, daring him to fight. Oliver told FOX5 Atlanta the teen responded to Sanders, saying, “No, I don’t want to do it,” and Sanders said to him, “No, you’re a tough guy.” Sanders also can be heard in the video threatening to search the vehicle. An anonymous caller reported the incident, leading to an investigation that included viewing body camera and dash cam footage.

Sanders said that the traffic stop was due to the driver not staying in their lane, which footage showed was technically true. Plus, Oliver said, the driver appeared to be speeding.

Chief Oliver also said that Sander had a history with three prior disciplinary actions against him, including when he threatened to send anthrax to a high school and blow it up, after they weren’t happy with a security he provided for them.