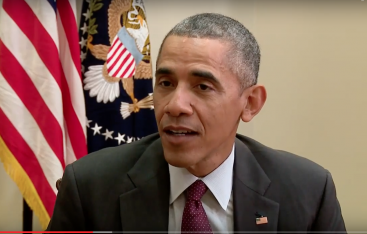 President Barack Obama appears to taking a new approach in his effort to pressure Republicans into holding a vote on Supreme Court nominee Merrick Garland.  In an interview on Monday, Obama suggested that Republicans would be better off accepting a known quantity like Garland than getting stuck with whomever a President Donald Trump might nominate.

In an interview with Buzzfeed, Obama reminded viewers of the GOP’s decision not to hold a hearing on his Supreme Court nominee and warned of the potential consequences of that decision.

“Now what we have is a situation where having made that promise, Republicans are looking at a Republican nominee who many of them say isn’t qualified to be president, much less appoint somebody,” Obama said.  “And it seems to me they’d be better off going ahead and giving a hearing and a vote to someone who they themselves have said is well-qualified.”

Earlier this year Trump said he would release of a list of judges that he would consider appointing to the nation’s High Court, but, so far, he has not done so as of Monday.  In the past, Trump has suggested that he would appoint conservative justices, even naming appellate judges Diane Sykes and Bill Pryor during a primary debate.

Obama also renewed his calls for constituents to put pressure on their senators to hold a vote on the Garland nomination.  He cited the willingness of some GOP senators to go back on promises to not even meet with Garland as proof that the pressure is working.

“My hope is that the more pressure viewers are putting on their senators just to do their job, to give the guy a hearing and a vote, more senators will recognize the position they’re taking is not tenable,” Obama said.

The President also expressed concern on how this fight may set a dangerous precedent.

“Let’s say a Republican president in the future is trying to appoint somebody. Democrats are going to do the same thing, and it’s going to be tit for tat and pretty soon were going to have a situation where we can’t fill our Supreme Court,” Obama said.