Man Posts Video of Himself Pointing Gun at Guy He Thought Was Gay: ‘I Hate Gay N****s’ 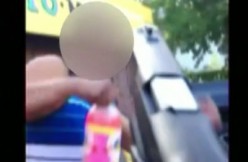 Police in Detroit, Michigan are looking at whether one recent incident was motivated by bias, but their best source of evidence wasn’t the alleged victim — it was the suspect.

On Tuesday, a guy posted video to this Twitter account, @binswanson. Footage depicts him pointing a gun at another man that he thought was gay, according to a WJBK report. “I hate gay n****s,” wrote the suspect, who is black.

One witness spoke to WJBK about this.

“‘Pull your pants down, I have a gun,” witness Robert Howell quoted the suspect as saying.

“To think that somebody would be so brazen that they could point the weapon in the face of an unsuspecting citizen and then post it on social media as if the Detroit police are going to stand idling by and do nothing,” Detroit Police Sgt. Michael Woody told reporters.

The suspect doubled down on the act in several Periscope videos obtained by WJBK.

“Because if he [the victim] would have [taken his pants off], he would’ve been shot, period,” the suspect said in one video. In another, he apparently displayed his firearms, and challenged cops to arrest him.

Detroit police have yet to find and identify this man or the victim.

According to Equality Michigan, an anti-violence and LGBT advocacy group, Michigan is actually one of 18 states that don’t include anti-LGBT bias as a possible motive in its hate crime statute.
–