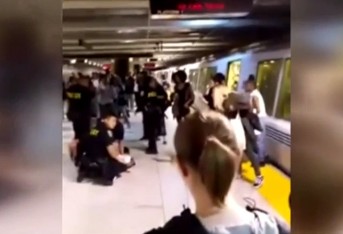 Jury selection began in San Francisco on Friday for a trial over an incident that took place back in July between an African American man and several BART police officers.  The arrest was captured by witnesses on cell phone video and posted to social media where many questioned the conduct of the officers.  Michael Smith, 22 was ultimately charged with six counts of battery on a police officer and one count of resisting arrest.  However, at his upcoming trial, his public defender, Jeff Adachi, essentially plans to argue Smith had every right to fight back to protect himself from what Adachi sees as excessive force used by the officers.

SFGate.com provides some additional background on what went down back in July.  According to the report, police detained Smith in response to complaints of an armed man attempting to rob an individual on a BART train.  Prosecutors say the cellphone video does not tell the whole story, including parts about how Smith allegedly spat upon officers and attempted to kick officers during the arrest.

Adachi does not dispute that there is more to the story.  In fact, he says officers were too quick to jump to conclusions about his client.  Adachi claims Smith was never attempting to rob anyone, rather he was involved in a dispute with his girlfriend — and that is why a mistaken passerby called 911 in the first place.

Police admit they did not find a weapon on Smith when he was detained.

Adachi says he plans to argue the police used excessive force and Smith’s actions were necessary.

“His actions were necessary in order for him to save his life,” Adachi told reporters. “This was a situation where the officers really made assumptions about him and acted too swiftly.”

Adachi says the law provides his client may “lawfully use reasonable force to defend himself” from an officers use of excessive force.

Officers have denied using excessive force and a BART spokesman told reporters this is not Smith’s first run-in with BART police.   In both 2013 and 2014, the spokesman said Smith resisted arrested when officers attempted to stop him during incidents on the BART.  Furthermore, they contend Smith was the initial aggressor in this instance as well and the body camera footage (which has not been released) will prove it.

Hadar Aviram, a law professor at UC Hastings in San Francisco, told the newspaper Smith and Adachi have an uphill battle to convince a jury.

“Jurors tend to assume that the cops are telling the truth,” said Aviram said.